Holi the festival of colours is great fun with friends.

This year for Holi, I had friends over for lunch. It was also the day of the Cricket World Cup match – India v/s West Indies. Perfect day to enjoy a holiday. Friends, food and TV

I made finger foods as it goes well while watching television. I started the meal with red wine and fried peanuts. Served a curd dip with carrots n cucumber and wafers. 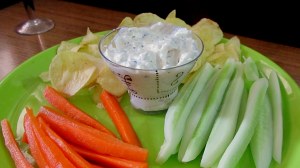 This was followed by Nachos. I served these with refried beans and cheese.

Then followed Chicken fry and potato pattice. The chicken fry was a take-away from a restaurant close-by and the pattice were courtesy a friend. I forgot to take pictures of these as I was much to busy eating the pattice.

All this food was enjoyed by India playing very well and seeming to win the match and good conversation.

We then ordered pizzas from Domino’s.

All of us were really satiated but wanting the dessert.

I had only made this once before about 2-3 years ago. I was a bit apprehensive on how it would turn out but I must say – it was perfect. Yippee…

It was a great day well spent.. India won the match. Everyone enjoyed the food. I think everyone went home early evening and slept.