I love this place. During a period of 1 month, I would have visited this place about 5 times!

I have the pics of all the food I have eaten there except their Chutney n Cheese sandwich. Its really good. The sandwich reminds me of the one you get at NCPA when attending the theatre there. Only difference is that the sandwiches at Leo’s are bigger with more chutney and cheese. Priced at Rs. 60.

Recently for dinner, I had their Danish Croissant and Veg. Quiche. The Danish croissant has a corn and cheese filling with corn sprinkled on top of the croissant. I loved picking out the burnt corn and eating it and then I dived into the croissant. Its a lovely croissant. 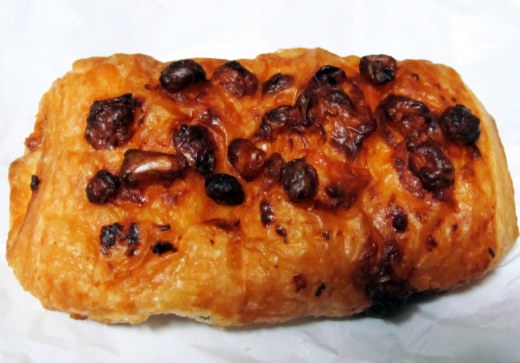 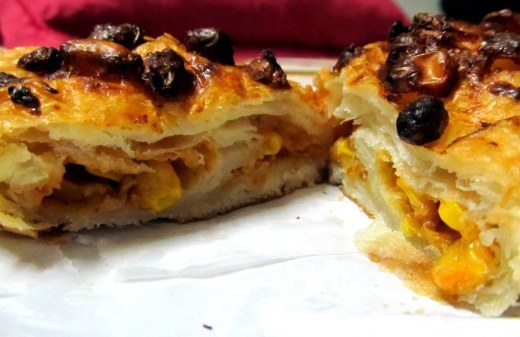 The Veg. Quiche is a spinach, mushroom and cheese person’s delight. Its got a lovely texture and is almost a melt-in-your-mouth savoury. It looks like a medium sized quiche but it packs a load of taste. For its size, its quite a tummy-filler.

Its a nice big-looking croissant. Looking at it makes you salivate.

However, it flattens on pressing it slightly and fits well into the mouth. The chocolate flavour is good but find the layer too thin. I would have preferred if the chocolate layer was a tad bit more. However, I would still pick it up as an after-meal dessert if my meal has been a light one.

the Chocolate croissant with chocolate inside

All the three savouries above are priced at Rs. 50 each.

I’ve eaten the veg pizza twice. The first time, I liked it a lot. However, the second time, though the taste was the same, it had a strong flavour of garlic, which I didn’t like – so will be hesitant to pick it up again.

Yet more things to try at Leo’s !